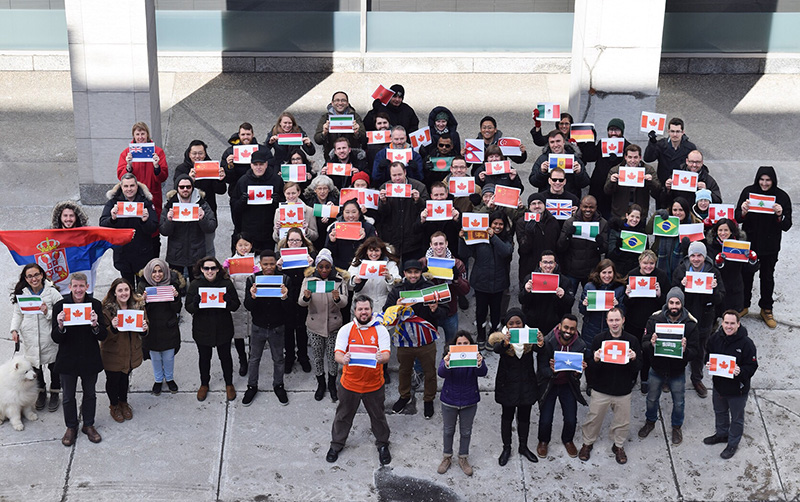 Summary - At Klipfolio, we have put a lot of effort into being diverse and inclusive. A company functions better when its employees are a gender-balanced, diverse lot — a dynamic mix of people of different cultures, ages, and viewpoints who feel included and accepted.

I firmly believe that diversity and inclusion are good for a company. I think a company functions better when its employees are a gender-balanced, diverse lot — a dynamic mix of people of different cultures, ages, and viewpoints who feel included and accepted.

At Klipfolio, we have put a lot of effort into being diverse and inclusive.

But even though I believe we are on the right path, to the extent that our employees are ethnically diverse and we have what I think is a good overall gender balance, diversity and inclusion remain something I struggle with.

Because there’s no definition of exactly what diversity is. In fact, it’s a bit of a moving target. As a result, a company never really knows when it gets there.

The benefits of diversity and inclusion

There is a growing acceptance of the fact that diversity is a good thing for companies, both internally for the employees, and externally for the clients. (The recent diversity scandal at Google illustrates how much traction the issue has.)

An article in Forbes last year, for example, talked about how diversity fosters authenticity in a company. Companies that embrace diversity can leverage all of the components that make them unique, and this carries over positively into the way they're able to interact with clients.

Michael C. Bush and Kim Peters, the CEO and Executive Vice-President, respectively, at Great Place to Work, the research partner for Fortune’s annual list of the 100 Best Companies to Work For and other best workplaces lists, put it this way in an article at Fortune last year:

“At our research and consulting firm, we have gathered evidence showing that when employees look up and look to the left and right, what they see, they internalize. If they can see themselves, it gives them hope that they will be seriously listened to when approaching leaders with new product ideas, growth opportunities, or simply to connect. This hope fuels increased commitment, which is needed for innovation and the attraction and retention of A-team players of all types.”

As a result, major companies around the world are making big, visible efforts to be more diverse. The Royal Bank of Canada (RBC), to pick a local example, has a diversity leadership council and publishes a diversity and inclusion report (PDF here).

But scratch the surface and you will find that companies struggle, as Klipfolio does, with diversity and inclusion.

In fact, in that same Fortune article, Bush and Peters say that too many companies don’t do diversity right.

I totally understand. Because it’s hard.

First of all, there’s no proper definition.

Are you diverse when you have a 50-50 gender balance between men and women? What about ethnicities, age groups, religions, education levels or physical disabilities, to name a few other categories that could be counted? And how do you implement diversity?

For example, the number of Muslims in Canada is growing. Should we hire specifically to reflect changes with each census, or let it happen organically?

Second, you’ve got to make a conscious effort to hire people who are different from you. It’s not easy. There are unconscious biases to let go of.

Third, diversity is a moving target.

For example, increasingly, it’s no longer enough for a company to be diverse; there’s a growing movement to encourage companies to show that they use diverse suppliers as well. Supplier Diversity Canada, for example, is an initiative aimed at “bringing more women-owned, aboriginal-owned, minority-owned and LGBT-owned businesses into corporate supply chain and government contracts.”

Fourth, diversity won’t work if it’s not accompanied by inclusion.

Hire more women? You need more women’s bathrooms. You also may need to change the way you run meetings to adapt to different styles of being and interacting. At meetings, everyone needs to be able to feel they can contribute and be heard. As RBC puts it on its diversity and inclusion web page:

“Diversity is the mix; inclusion is getting the mix to work well together.”

Finally, how you view diversity and inclusion may even depend on your age.

One study by Deloitte says millennials view diversity as the blending of different backgrounds, experiences, and perspectives within a team, and say it’s necessary for innovation.

Boomers and Gen-Xers, on the other hand, view diversity as a representation of fairness and protection to all — a moral and legal imperative.

The study predicts that “as millennials flood leadership ranks, their perspectives will demand a shift in traditional diversity and inclusion models.”

How we manage diversity and inclusion

When you think about it, startups are usually founded by a small group of friends or people who have worked closely together. In other words, people who are similar to each other.

Klipfolio is no exception: Our founders were all white males, of roughly the same age, upbringing, and education. About the only ways we differed were what we studied at university and that we were not all heterosexual.

As we grew, we had to make a conscious decision to seek out a diverse group of employees. Or did we?

It’s not as easy as putting out an ad. Here are a few ways we've worked (and continue to work toward) diversity and inclusion:

You can’t discriminate in your hiring. That includes positive discrimination.

We put a lot of effort into hiring. We’ve found that we get the best results when we hire people who share our beliefs. In other words, we hire for culture — a shared belief about how we approach life, work, and ethical issues. We’ve ended up with people from all sorts of outlooks, backgrounds, and faiths. It’s the vision we share.

Another way to put it is that we hire for ‘why,’ not ‘what.’ We try to hire people who believe in what they are doing.

Make a special effort if you need to

Klipfolio probably has more female employees than most tech companies in Ottawa — something I’m proud of. But I’m not sure that makes us diverse.

At first, it was hard to work toward gender parity. The simple reason: it can be challenging for any minority in a particular situation to join a team that doesn't look like them or feel like it represents them. We were a team of white males, which likely meant that some women were reluctant to join the team.

Looking back, one of our early hires was a talented woman who has since led our support operations. I believe this aided our recruiting efforts in bringing in a few more women in our development, support, and sales teams.

After that, female candidates walking through the office saw women already working here. And that made them more likely to accept an offer to join us. We now even have a photo caption in our kitchen that asks: “Where are all the women? At Klipfolio.”

So while some changes will likely happen naturally, you may have to force others. But that doesn’t mean setting quotas.

Accept the imperfect while working towards perfection

I am still troubled by the fact that our management team is overwhelmingly male. I would like that to change. But I can’t change it tomorrow. I have to accept this while I work on it, and so do our employees.

We had one employee say she was bothered that she could see so few female role models in management.

Is a role model essential? Personally, I don’t think so. I subscribe to the view that in the absence of a leader, lead.

But on the other hand, I don’t want any employees to feel they can’t see themselves in the management team. As far as I am concerned, there is no glass ceiling — but then, that’s not really for me to say.

This is one example of the kind of issue I struggle with. I want to make the change happen. We’ve made a lot of changes. But we’re not there yet.

Accept that being more diverse will change you

The change will be physical: a prayer room for Muslims, in our case, or more women’s washrooms. (We’re happy to be building a prayer room in our new office.)

But your internal culture may also be forced to change, too. Have you always built team spirit with Friday night trips to a local bar? That may not work if you hire abstainers, or people with family obligations, or people who simply don’t feel safe in the bar you’re used to going to.

You will also have to question your biases about what is and what isn’t valuable: If a woman has just spent 10 years at home with her children, would you say she’s learned nothing in the process? Or would you say she’s developed lots of new skills such as the ability to multi-task, work under pressure, and handle competing demands?

The way you write your job descriptions will influence who applies. Are you looking for an “aggressive leader” or a “consensus-building team player?” You’ll get different results with one or the other.

So question yourself, your views, and your unconscious biases — and accept that you, too, will have to change.

What’s more important than meeting any diversity quota is creating an environment that’s accepting and open.

We make a conscious effort to make people feel included.

For example, we do regular all-hands meetings so that people can get to know each other, the company, and the projects we are working on.

At those meetings, I will make a point of having two employees interview two other employees about themselves — including their background, their culture, and who they are.

It helps and everyone loves it.

Some companies go so far as to offer cultural sensitivity training.

There are lots of different approaches to building diversity and inclusion. Some are more radical — not showing a person’s name when they apply for a job, for example, in an effort to reduce unconscious bias — others are softer.

No matter what approach, there’s no clear-cut solution and no easy way ahead. You have to work it.

Accept that you will struggle, and that the struggle will be more or less ongoing. Accept that you yourself will have to change. Accept, also, that it’s worth it. Because a diverse and inclusive company, a company that allows employees to be themselves, will be able to channel its commitment and its collective creativity to grow and prosper.