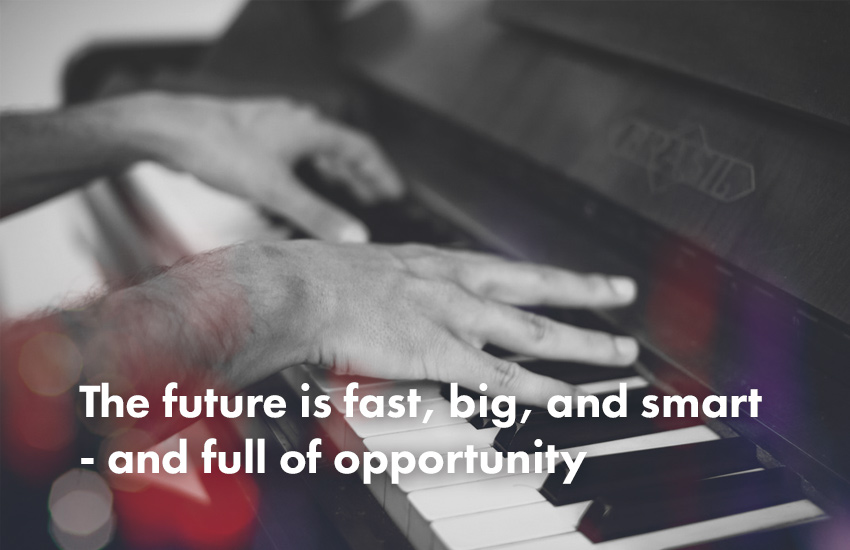 I’m just back from the Gartner Business Intelligence and Analytics Summit in Dallas, Texas.

It’s a sizeable event, drawing upwards of 2,000 people every year – most of them from large firms. (More about that later.)

One of the things that struck me as I listened to the speakers was hearing - and not for the first time; this is a recurring theme - that we are not using technology to its maximum capacity. In other words, technology is progressing so fast, people have yet to figure out how to harness the data now at their fingertips.

And that, I think, will translate into business opportunities for those clever enough to stay ahead of the curve.

Consider this: There are roughly 25 billion devices connected to the Internet today, or about 3.5 for every person on earth. The number is growing astronomically, at a compound annual growth rate (right now) of close to 40%.

And, what is astounding (to me) is that people have not yet figured out what to do with it. Apparently, even the jobs that our children will work at have largely not yet been defined.

People do recognize that technology and data are valuable.

In 2015, according to Gartner, more than one quarter of large non-high-tech companies acquired a tech company. Why? Because data, automation, efficiency and speed are so important to today’s businesses that traditional firms acquire tech companies purely for their skill sets and competencies.

And this, on top of the fact that analytics is still the number one investment area for most companies, and has been in nine out of the past 11 years.

Though already massive - today’s business intelligence (BI) market is valued at roughly $16 billion globally - it is projected to grow (according to Gartner/Forbes) to beyond $20 billion a year by 2020. I actually think that is conservative, particularly with the massive growth coming through the Internet of Things.

And here’s where I see the opportunity: It’s learning how to harness that data and use it.

There’s a lot of data out there - big data, real-time data, personal data - and there’s going to be more of it, especially as we start collecting more machine-based data streams.

Today, most of the learning is happening when we’re aggregating data. But what about the story small data tells? Think of tracking individual customers - the details of exactly what happens throughout a customer journey and how that might be used in real time to improve their experiences and impact outcomes. Businesses shouldn’t ignore the nuances that get lost in the billions of records.

Opportunities also come from being agile and organic.

The overwhelming majority of business intelligence and analytic projects are still rolled out and managed using a waterfall methodology. In a data environment that is moving so quickly, and where the future value is largely unknown, that’s a risky way to approach projects. At Klipfolio, we’re big fans of the agile methodology for those exact reasons and are seeing much higher success rates by using organic, bottom-up and iterative models. Start small with a valuable use case, learn, and only then take the next step.

We’ve known for some time that there are several trends in the BI market, and those trends still hold: the shift to cloud; the shift to decentralized decision-making; the shift to real-time action and the shift to mobile consumption.

Businesses also need to be aware of developments on the horizon – things that are not yet trends, but could very well be game-changers down the road.

One idea Gartner toyed with is that businesses could grow and be fully run by algorithms in the future.

Sound fanciful? Let me give you an example.

That’s today. Now, what if that algorithm could take cues from the audience, in real time, and improve the piece of music just the way an artist, live on stage, might? That is not very far off in the future - and composing music is one of the tamest examples I can think of for learning algorithm use.

I have one final comment about the conference, and it has to do with who attended. This was my second year at the conference and again, there were no small and medium-sized businesses.

Although I’m not surprised, this is unfortunate - because the millions of small and medium-sized businesses out there are the ones who I believe are really at the leading edge. They are already using the cloud, already agile, already mobile, already open to what’s next. For them, none of this is really new – it just is.