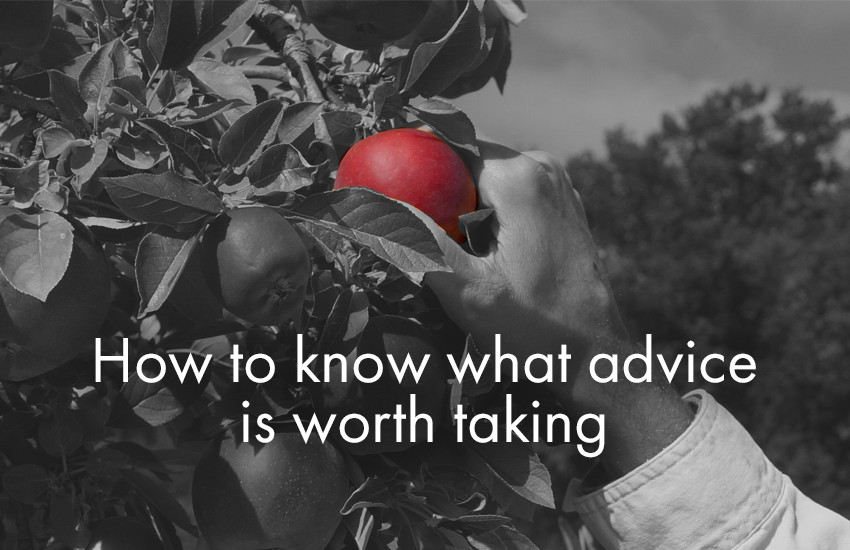 There are always plenty of people I can turn to for advice.

There are people we work with, including members of our board and our regular advisors.

There are people in the industry or related businesses, including people I meet at conferences or CEOs whose expertise I want to tap into.

And of course there’s the Internet: We all have our favourite Internet sites, places we visit regularly when we have a question. Not to mention Google.

I’m not shy about asking for advice, and I do it regularly.

However, it can quickly seem overwhelming. How do I know which advice to take, and which to ignore?

I’ve learned over time that not all advice is created equal.

Some people have given me good, even great advice; others not so good. Some people give advice passionately, with a “Listen to me!” attitude, while others do so without apparent enthusiasm. And some people hide an ulterior motive in the advice they give.

Here’s how I make sense of it all.

1. Understand who is giving the advice

It is absolutely critical that you know who is giving you advice, and where they are coming from. I asked a CEO for advice about financing during our seed round, and he immediately zeroed in on a number of pitfalls we should avoid. And although well intentioned, his business was very different from ours and I found that what he was saying was not relevant to us. Discovering that allowed me to learn from his advice, but ultimately ignore it. But before I could do that, I needed to understand why he was advising what he was advising.

2. Be specific in your requests

In the example above, I should have been more specific, asking the financing question in the context of a seed stage, software-as-a-service company. Here is another example: A few months ago, I was digging around about the norms for product trial conversion rates – in other words, how many paying customers we should expect to get from among the people trying our product. The response we got was a question asking what kind of trials we were talking about: Were the trials free, or did people have to pay for them?

I learned that I need to be as specific as possible when I ask for advice; the person I am asking needs to understand the context and the scope of my request.

If you start hearing the same bit of advice from various people, chances are the advice is good. But even then, be skeptical: Are all those different people speaking from their own experience, or are they all citing a single source? Beware of “Common Knowledge.”

It’s wise to look for direct experience. There’s a big difference between someone saying “We tried this and it works,” and hearing “This is supposed to be fantastic!” The first bit of advice carries more weight.

There are always risks to accepting – or rejecting – advice. You need to understand what the risks are in your case - both the probability and the severity. So when you consider a piece of advice, ask yourself what the consequences would be of accepting or rejecting it. Consider also the extent of the consequences: Would a fail be a minor setback, or would it be a catastrophe for the company?

5. Don’t be afraid to test advice

Before accepting a piece of advice, test it out if you can. That’s what A-B tests are for. There are many tools available today that can simplify this task. We use one called Optimizely, and are about to launch a major test on our pricing model. Creating a culture of testing in your company can reduce risks.

6. Separate the advice itself from how it’s being given

Suppose two people give you advice: One of them does so quietly, perhaps even awkwardly; the other is enthusiastic and passionate. Who are you going to give more credence to?

Sometimes, we feel compelled to listen to the most passionate person. And in many cases they might be right; but they also might be wrong. So look at value, not delivery.

There’s no shortage of advice out there. Make sure you have a system in place to suss out the stuff that’s best for you.