What is ARR Growth Rate?

ARR Growth Rate is the change in annual recurring revenue over a given period, typically represented in a percentage. Steadily increasing ARR growth rate year over year is usually indicative of improved capital efficiency and product-market fit.

How to calculate ARR Growth Rate

What is a good ARR Growth Rate benchmark?

The median ARR Growth Rate is 41% for companies with an ARR between $2.5 million and $10 million. 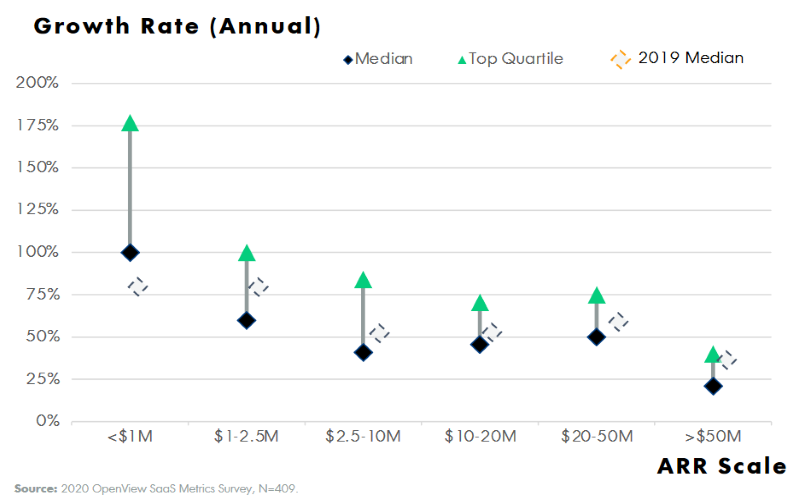 How to visualize ARR Growth Rate?

You want to have your company's growth rate ready to share at any given time, so it's best to visualize your ARR Growth Rate with a Summary Chart, also referred to as the "metric view". You can opt to compare growth with a previous time period, such as year-over-year, to demonstrate improvement in growth rate compared to the past. Check out the example to see how a typical SaaS company would track and measure their ARR Growth Rate:

Here's an example of how to visualize your current ARR Growth Rate data in comparison to a previous time period or date range.

ARR Growth Rate is a growth metric often used to measure percentage growth in subscription revenue model businesses. Frequently used as an internal measure of growth in SaaS companies, ARR Growth Rate is calculated by dividing the difference between Annual Recurring Revenue (ARR) at the end of a given time period and beginning of the same time period, by the ARR at the end of the period. It is expressed as a percentage.

By tracking ARR Growth Rate, you gain insight into the velocity at which your business is growing and the ability to identify and address potential roadblocks and decline in growth. Drops in ARR Growth Rate can be remedied in many ways, examples include: reducing churn, increasing S&M spending at a fixed LTV:CAC, expanding to new markets, and increasing your ARPU/ACV.

How to calculate your company's growth rate

Change in revenue over time is usually the first metric people refer to when calculating company growth rate. However, you can choose from gross profit, gross sales, new users added, or NRR to measure company growth as well. Investors often look at the growth rate of your company to determine if they want to spend time assessing your company for investment. Metrics like ARR Growth Rate can be a great place to start for SaaS companies wishing to analyze their annual revenue growth.

How do you calculate ARR?

ARR is usually calculated as your Monthly Recurring Revenue (MRR) * 12, which is the annualized monthly recurring revenue. Check out the detailed ARR and MRR definitions on MetricHQ for formulas, calculations, and examples.

What is growth rate in business?

Here’s a great article about the ARR Growth required for a SaaS company to go public.