Ottawa, ON, 15/11/2018 - Klipfolio announced it ranked 42 on Deloitte’s Canadian Technology Fast 50™, a ranking of the 50 fastest growing Canadian technology companies with the highest percentage revenue growth from 2014 to 2017. Klipfolio grew 514% percent during this period.

Klipfolio’s Chief Executive Officer, Owen Sagness, credits the groundswell of data driven small and mid-sized businesses and Klipfolio’s simple, natural to use ability to connect many different data sources, for the company’s 514% revenue growth. He said, "We’re honoured to have been recognized two years in a row, having been named to the Canadian Technology Fast 50 in both 2018 and 2017." 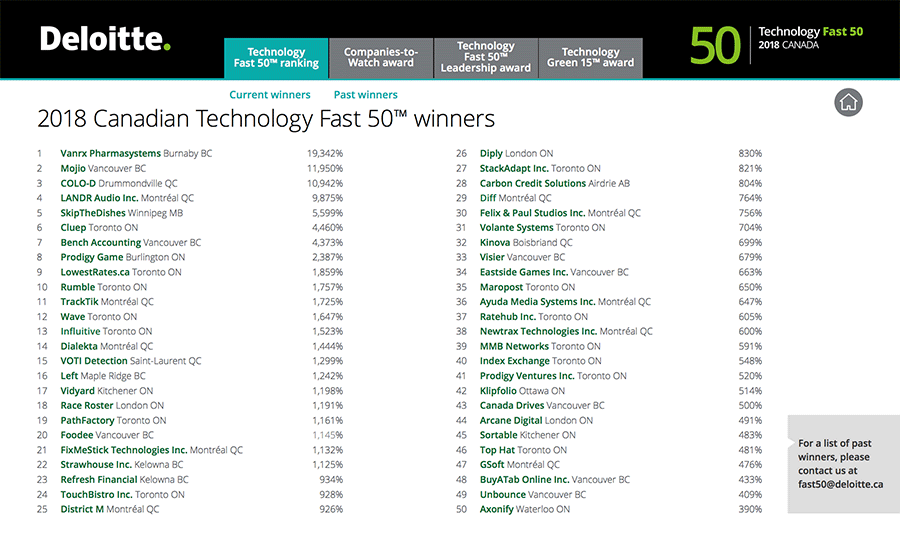 The Technology Fast 50™ recognizes the 50 fastest growing Canadian technology companies with the highest percentage revenue growth from 2014 to 2017. Qualifying companies must have headquarters in Canada, have been in business for at least four years, have revenues of at least $5 million, own proprietary technology, and conduct research and development activities in Canada.

This year, Klipfolio garnered a ranking of 188 in the Technology Fast 500™ list.

Deloitte refers to one or more of Deloitte Touche Tohmatsu Limited, a UK private company limited by guarantee (“DTTL”), its network of member firms, and their related entities. DTTL and each of its member firms are legally separate and independent entities. DTTL (also referred to as “Deloitte Global”) does not provide services to clients. In the United States, Deloitte refers to one or more of the US member firms of DTTL, their related entities that operate using the “Deloitte” name in the United States and their respective affiliates. Certain services may not be available to attest clients under the rules and regulations of public accounting. Please see www.deloitte.com/about to learn more about our global network of member firms.

Klipfolio is trusted and relied on by over 11,000 of the world’s best and brightest organizations. As a leader in the cloud-based business intelligence dashboarding and reporting market, Klipfolio is a cost-effective, flexible analytics solution that integrates with hundreds of data services to create powerful business insights. With customers in healthcare, financial services, consumer goods, non-profit, and marketing, sales, support, Klipfolio is changing the way data is used one Klip at a time. To learn more, visit the Klipfolio website or follow us on Twitter, LinkedIn, Facebook.