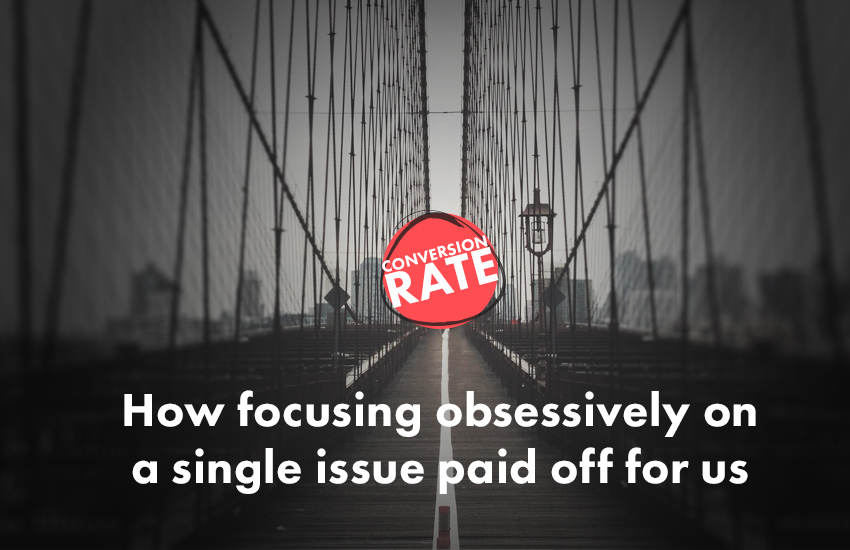 We always have our eye on our conversion rate – the number of people who convert from being prospects to paying customers.

Earlier this year, we realized we had a problem. Though we had lots of people trying our product, only about 4% of the people who entered a trial were converting into customers. And try as we might, we did not succeed in improving the conversion rate significantly between the first and the second quarters.

Why couldn’t we move the needle?

But this time, we did things differently: We got the whole company to focus on that one issue – obsessively. How to boost the conversion rate became the topic of lunchroom conversations. Everybody started digging in - analyzing the same issue, doing research and focusing on potential solutions. It ended up being a structured look at one critical issue. The result was ideas.

And we put the best of those ideas to work. They included:

What’s awesome about this process is that it worked.

Our Q3 conversion rate shot up to 6% - a significant increase.

And we were able to tell employees that their efforts paid off – which was a powerful message in terms of company morale.

In retrospect, I think our decision to obsess about one thing was the key to our success.

We could have gone after any number of key performance indicators, but we didn’t: We focused on a single issue.

As a result, our efforts were focused, too. We had everyone in the company genuinely concerned and motivated and working towards a common goal. We were all rowing in the same direction – and that coordinated effort proved to be very powerful.

Does that mean we let other key performance indicators drop?

Yes – to some extent. But that’s not a bad thing.

Many of our other key indicators, things like retention rate or expansion, derive from the conversion rate. After all if you can’t convert people into paying customers in the first place, you can’t sell them anything else, or create incentives to keep them.

We’re not saying we’re done with the conversion rate, but we’re declaring a significant victory on this issue.

Our next challenge is moving the needle on expansion and retention.