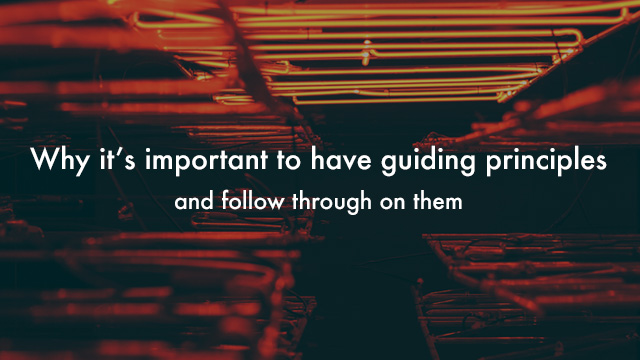 You might think that everyone has guiding principles and works toward them. But unless they are clearly enunciated and clearly understood, it’s difficult to set goals and measure progress. Yet having a measuring stick is important, because the potential payoff is big.

Two and a half years ago, we launched our cloud-based dashboard. It was an important move for Klipfolio, and it set us on the path to significant growth.

One of our very early “musts” was that our products be ‘self-serve’ – in other words, that users be able to set up and manage the dashboards by themselves, without having to call in support from their IT team or worry about writing code.

We set that as a guiding principle not for any internal reasons, but because our early customers were telling us they needed a self-serve product that could be managed by the business user. In other words, a product that was user-friendly.

The reality is that our early product was not that easy to manage.

I often use our own dashboard to build Klips for my own use – in other words, I use Klipfolio the way a customer would.

One of the first Klips I built two and a half years ago pulled together our overall website metrics – things like the number of visitors, how long visitors stayed on the website, and how many pages they looked at.

It was a great Klip at the time, but it was not easy to create. It probably took me six to eight hours of hard work to get it working. The way I had to calculate formulas was hard and repetitive, the visual indicators showing positive or negative performance over the previous 30 days were separate image files I had to link to, and decoding the Google Analytics API was a pure nightmare.

A few weeks ago, it was time to renovate that Klip. The original Google Analytics data source I worked so hard to configure failed because Google changed the version of the API I was using.

I was shocked at how easily I was able to update that Klip.

It took me about half an hour, from start to finish. And it’s not because I have become more adept at these things.

The experience highlighted for me how much closer we’ve come to the self-serve promise. There was much we had accomplished.

As an example, I was able to configure a Google Analytics data source for that Klip in four or five clicks, and no code was required. That is a huge hurdle that has been eliminated. I was also able to set up visual indicators, using simple conditions similar to what I’m used to in Excel.

And there was a series of similar experiences that I was now able to do quickly and on my own, whereas two and a half years ago, building this Klip close to killed me.

We would not have been able to accomplish that without having guiding principles and setting and reaching targets all along the way.

Over the last two and a half years, we invested all along the line so that people who are not software developers can build their Klips quickly and build value every step of the way by reducing the involvement of highly paid developers.

This fundamental principle of self-service is really powerful. We know that a number of our clients build their own Klips at night, from home - when there generally are no colleagues to turn to for help, and no developers to complete a task. So it has to be that easy.

Improving the user experience was a conscious decision on our part. We knew – and our customers told us – that we needed a journey that was self-serve. And if I can count my recent experience as scientific proof, I’d say that in the last two and a half years there has been a 10-fold improvement in the time it takes to build a Klip.

By defining your must-haves, by setting targets, and by motivating people to reach them, we’ve dramatically improved our product. We’re not done - not even close. It’s an on-going process.