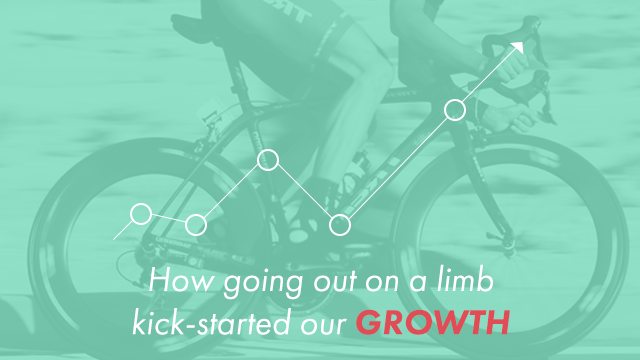 Our big break came from an unexpected source: executives wanting to show off their new iPads.

When we started Klipfolio in 2001, mobile was not part of the picture. So when we created our first product, we did what everyone did in those days: Customers would download it onto their computer. It seemed to work. Our software was selling.

Then the cloud and social media came along, and mobile devices. The launch of the iPad in 2010 really changed the way things were going.

Very quickly, some of our main clients came to us and said, “Our CEO is running around with a new iPad, and wants metrics on the iPad to show people in meetings. Can you do that?”

We could, but it would mean putting our product online. Our metrics would have to be accessible through a Web browser. Data would have to be stored in the cloud. Making that happen would require a major retooling.

All this while we were profitable.

It was a big gamble – undertaking a wholesale replacement of our product and business model.

We decided - with considerable trepidation – to make it happen.

In retrospect, was it worth it?

Listening to our clients, who made us aware of what was happening in the market as a whole, resulted not only in a better product, but propelled us toward growth in ways we could never have imagined.

Here’s what used to happen:

Our sales process almost always started with discussions with the client’s IT people – selling them on our product. The pre-sales effort, technical proof-points, planning and early training was a lot of work.

Once they were on board, we’d work with them to convince the client’s procurement people that we had something worth buying. Sometimes the legal department would get involved as well.

It was taking six to nine months to complete the sales and deployment cycle – from initial contact to getting the dashboard installed on the client’s computers.

Now, I know that that might seem about right for traditional software sales - but it was certainly not where we wanted to take things. Our cost-of-sale at the time was roughly $6,500. At the time, close to 40% of our revenue was also coming from professional services (needed because with an on-site deployment that needs integration, development, and training, it’s anything but easy for customers to do it all on their own). Our average selling price was in the tens of thousands of dollars, the sales cycle was onerous. And the result was an inefficient lead-to-win ratio - it took us 62 leads for every one new customer. Customer lifetime value was not pretty either, given an annual retention rate of 74%.

Putting our product on the Web and our data in the cloud changed everything.

Our new business model was so efficient, it made our product much more affordable. So much so that potential customers no longer needed to work through their procurement and legal departments to buy our services.

Making the product self-serve reduced the need to involve IT people. Individuals in a firm could just set it up themselves - using their own credit card to get things started.

When we launched the Web version of Klipfolio in 2012 , we started with a handful of 40 alpha and beta customers who had helped us shape the new product.

The cloud version was truly selling itself - and rapidly.

We had made the correct assumptions. We were thrilled - not to mention relieved.

But none of this would have happened if we hadn’t listened to our customers, trusted our view of the market, and made the big changes to give people what they wanted.