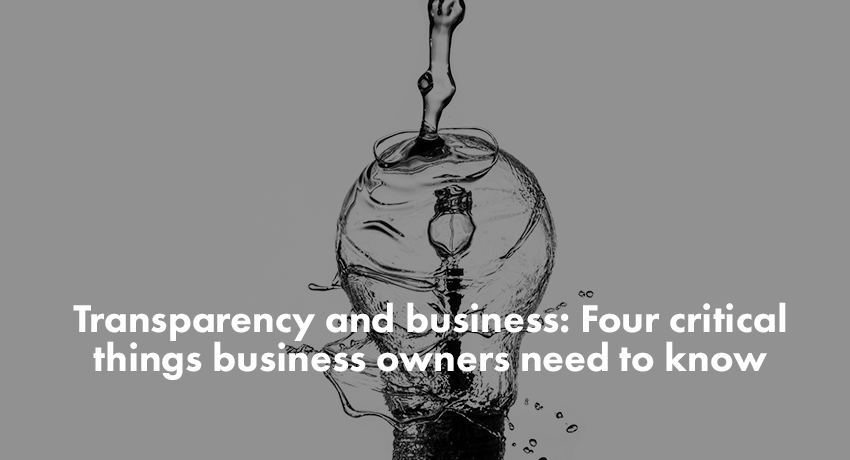 There’s a growing culture of openness in society today, and the business world is caught up in the trend. It’s generally felt that being transparent about your operations is good for business.

In this blog, I want to address the limits of transparency. Because while in general I’m all for it, I also believe that businesses have to be aware of the consequences of releasing too much (or too little) information.

In today’s culture of openness, where millions of people gleefully post details of their private lives on Facebook, Snapchat and Instagram, and where everyone from governments to WikiLeaks seems keen to unleash a flood of data, where does a startup stand?

This is not just a philosophical question.

Every business, and particularly a business just starting out, can be helped or hindered by its decision to release – or not release – certain information.

As a result, I believe every business owner has to give serious consideration to transparency issues. You need to understand the implications of being entirely transparent – and why it may be better to keep some information to yourself.

Here are four things business owners need to consider as they prepare their own transparency policy.

Part of it is a generational shift, and it’s good.

Compared to people from other generations, millennials are definitely much more comfortable sharing information – and not only about their personal life, but about their business life as well.

But the move to transparency is more than just a generational shift. It’s cultural – possibly a reaction to the fact that we have so much information at our fingertips these days, and so many ways to get it out there.

We see the desire for openness expressed in the way our offices and homes are designed. Walls are disappearing in favour of "open concept."

Governments are adopting an "open government" ethos and sharing an enormous amount of data. Canada has created an Open Government Portal with the stated objective of working “to create greater transparency and accountability, increase citizen engagement, and drive innovation and economic opportunities through open data, open information, and open dialogue.” There is even a global initiative called OpenGov, which is worth checking out.

In the business world, you hear everywhere that transparency is good for business. (Here’s one example from Fast Company, and here’s another from Entrepreneur.)

How we're using all the information that’s available to us is changing too.

Information used to be rare and hard to come by. Having information gave someone power, and that person didn’t necessarily want to share either information or power.

Think back to the offices of the 1990s, where the boss (wearing a power suit, of course!) had a corner office with a door.

Data was delivered to that corner office, to be massaged, manipulated and carefully guarded. It would have been released on a "need-to-know" basis.

But today the whole ethos has changed. We’ve come to see data as something to be shared. And from that perspective it makes good sense, as a business, to be transparent. People now expect transparency, and it seems good for business.

For example, at Klipfolio we share the same data across our product management, UX (user experience) and development teams. Access to that data is critical and is never kept from one team or another. Ideas don’t live within a single department or within a select group of people.

2. Transparency can hurt as well as help

There are good reasons to be more transparent.

For one, I think it helps motivate employees.

If management guards information, it creates an environment in which employees are implicitly encouraged to stay below the radar, do their jobs and keep quiet. If you guard the data, you are telling your employees you don’t value them.

But if you share information and encourage employees to react to it by coming up with creative and innovative solutions to the challenges the business faces, the result is more motivated employees.

This is a proven principle, and one of the best examples of its success comes from Toyota.

In 1951, Toyota introduced a principle called the Creative Ideas and Suggestions System in which employees at all levels were encouraged to offer their ideas for improvements in processes or products. That system, and Toyota’s continued use of its employees to improve its product, is credited with being one of the main factors of Toyota’s success.

(Here’s a link to a blog about creating a suggestion system for continuous improvement and another that gives more information on Toyota’s system.)

But can you share too much information? I think so.

A company called Baremetrics.com created Open Startups, a website on which companies can post – in real time – all their critical metrics.

The site proclaims that “these companies are embracing transparency and openness by sharing their metrics with everyone! The numbers here are live, so follow along in real time as these companies grow!”

The reality is that startups often struggle – more often than most people realize. And if the world can see a company stumbling, in real time, there’s a very real risk that instead of having a chance to regroup and recover, the company will be seen as failing – which can demotivate employees, clients and potential investors. A small failure can turn into a big one.

And then there’s the question of how widely you share information.

While it can be fine to share a lot of information with employees, what would happen if your competitors got that same information? Could it hurt you?

And even if you are able to restrict that information to employees, how do you protect it? What happens if one of your employees leaves to go work for a competitor, or starts up their own firm?

If you share salary data publicly, a rival will know exactly how much money to offer if he or she wants to poach one of your employees.

On the other hand, if you don’t share salary data, how do your employees know you are treating all employees equitably? How can they be sure, for example, that men in the company aren’t earning higher salaries than women in jobs at the same level? (Your employees had better trust you!)

But then, how would your employees react if you shared their salary information on an open website? What about personal data like marital status or health data like a mental illness or disability?

So transparency is not an open-and-shut issue. It clearly has boundaries. There are a lot of factors to consider. And some of those factors can hurt you.

3. Data without context is risky

One of the many factors to consider is how data is interpreted.

Even if you have made a conscious decision to release information, you have to keep in mind that raw data is just that: raw. To be understood, it needs to be put into a context.

But if you are very transparent, how does the data get contextualized?

When data was hoarded rather than shared, management gave the data context before releasing it.

Today, companies have to decide whether they think it’s more important to have a small group of people (usually management) interpreting the data, or whether they want to set the data free and get everyone to share in providing context.

And keep in mind that even raw data can exert a lot of influence.

If you release figures that show you are exceeding expectations, employees are pumped. But what happens when the data shows you are not doing so well? How do you motivate employees and provide leadership? How does a manager make sure people work with their heart, instead of just accepting the data?

Because of all the factors I have just listed, I think most important is that every company has its own very clear policies about transparency.

We have our own standards.

For example, I’m a full advocate of sharing a lot of internal data with employees.

One way we do that is by having big LCD monitors around the office where we share real-time data – information on our revenue targets, for example, or customer support trends. The information we share is not always up and to the right; it is not manipulated.

We’ve had a lot of success by being transparent with employees. By telling everyone what’s going on, and by inviting them to contribute their ideas, we’ve created a culture of "we’re all in this together."

But as a private company, we wrestle with how far we go in releasing information beyond our employee group.

For example, we have made a conscious decision not to publicly state our revenue figures.

But even so, we sometimes have to ask ourselves the question: What would happen if information we want to keep private somehow got out?

For example, salaries are private. But what if this data somehow got released into the wild? It’s an interesting thought experiment: Would the general consensus be that the figures make sense? Or would people say they look unfair? Public or private, you need to do the right thing....

I think a private company, particularly a startup, can be hurt if too much data is released, especially if it’s released before the company is mature enough to withstand a negative reaction to negative figures.

So a transparency policy is a bit of a balancing act.

But if you get it right, you can reap the rewards of greater transparency while protecting yourself from potential damage.